Comments Off on Uncle Sam wants you!!!

The JustDrift-Live forum is back. Register and let’s get this forum going!!! Ask your questions and stuff… DISCUSS! 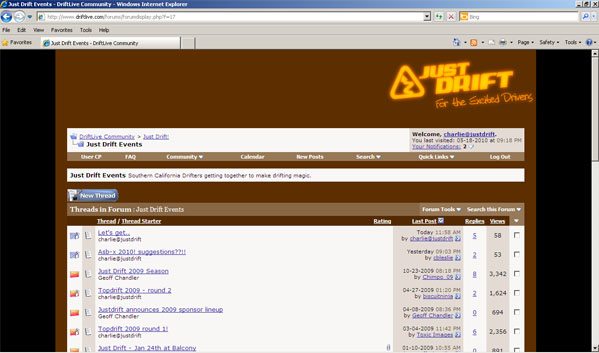 Comments Off on JustDrift forum is… BACK! 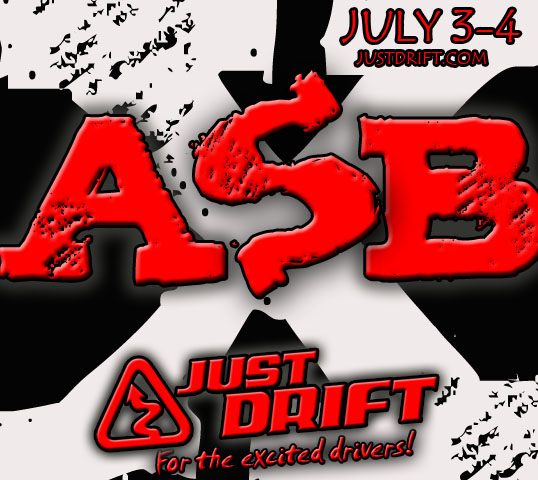 Comments Off on ASB-X… It’s coming!

This weekend was another blasting weekend! Drivers started arriving at 7AM. Everyone was busy unloading their race cars. The staff had the tech inspection going so everything will be on time. Registration and check in started at 8AM followed by a drivers meeting. Everyone was brief on practice and safety. Track started blazing at 9AM! Watching these guys on practice is very amazing! Most of them were on point and some needed clean up a little. But this will be one hell of a round! Our judges came out to get some driving on their own. Henry Schelley in his “street car S14”. Street only means he drove it in the streets. But make no mistake, he sold his S13 SHELL! So where’s the motor that was on it? Then Justin Pawlak came with his crow favorite green FC RX7. He had a line going for rides. He was rippin` it at HTM! Hiro followed the next day in his 4 Door Drift car, the Cressida. Glad that our judges can actually pick the right lines and have fun.

So they know what they are looking for and what they want the drivers to do the same. They can do it too!

Josh Guild of Las Vegas already broke his Z32 tranny in practice. He had to get one locally. Mike Bolanos also broke his tranny. But he had an extra one with them. So swapped it and off he went! Drivers were taking it easy and not going nuts.  As the day ended… temperature was a lot cooler. Everyone was settling down in their campsites. Fire pits started lighting up and you can smell the bbq cooking all over. It was almost an All Star atmosphere on Round 2. I can only imagine what it will be at ASB-X.

My Vegas crew light up our grill and started cooking too! I was so tired… but luckily I had the Toy Hauler RV at the track. So I didn’t have to go far to catch my zzzz’s.

More drivers arrived and checked in. HTM pit was jammed pack! From the entrance all the way to the other end of the pit. Thanks to City Tires for providing track support and changing tires. Glad you guys can make it! Congrats to John (CTO Owner) for getting on his knees and asked Inez to be permanently attached! Congratulations John and Inez!

Checked in started and was followed by a drivers meeting with the judges. The judges explained what they were looking for. 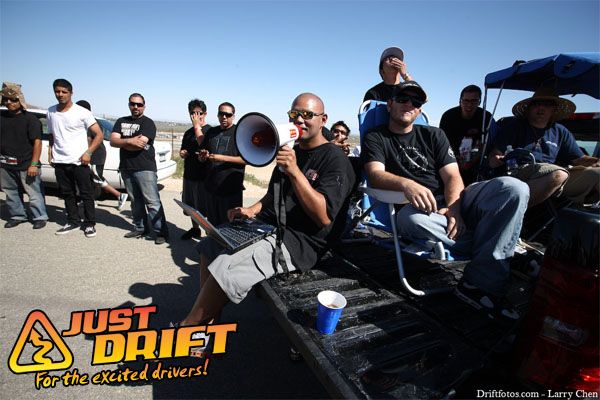 We have all 41 drivers on deck! Getting ready for the battle and having fun. Judges are getting ready too! 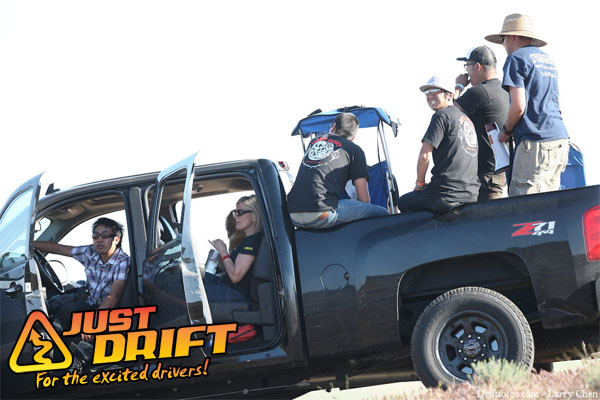 Bruce Kress in his hot looking FDRX7 showed a lot of improvement in his driving all through out the series. Maybe We’ll see him in podium soon?!

As soon as the qualifying was over. Top 16 was announced and tandem battle is about to begin! 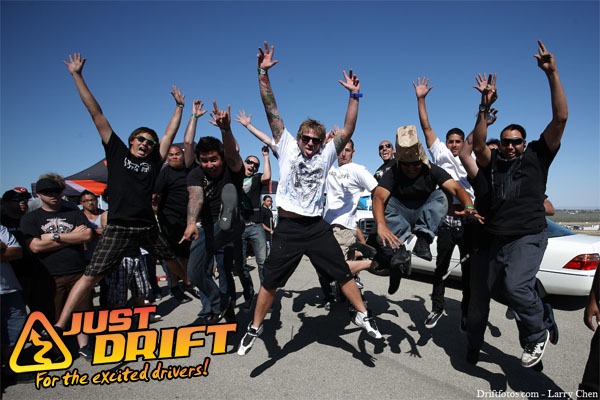 Casper Canul an ex FD pro driver came out to compete. He looks more relax in his Ex Rock Star S13. He came and qualified to Top16 only to have mechanical issues with the car. So he did a bye run. 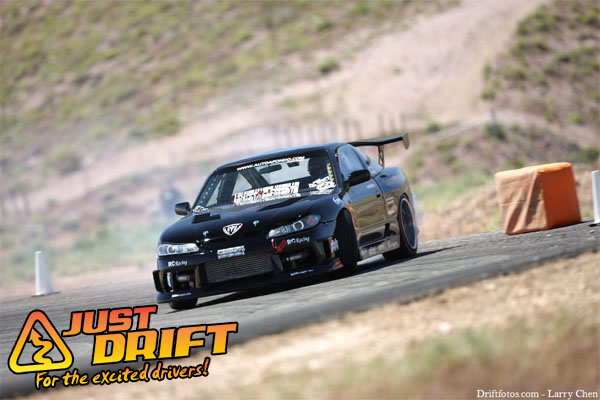 Carlos Cano was eliminated early on and so was the round 1 winner David Briggs.

This is what’s all about, no one can dominate a series and you’ll never know the ending until it’s fought to the last drop of fuel and the last grip on the rubber. David  Briggs vs Mauricio Ornealas.  David Briggs advanced to battle  Josh Guild on a one more time, Josh Guild was on point and eliminated David . Casper Canul in his new S13.5  lost to Josh Guild in top 16. Josh Guild is a contender from Las Vegas and has been taking names in the TOPDRIFT series. 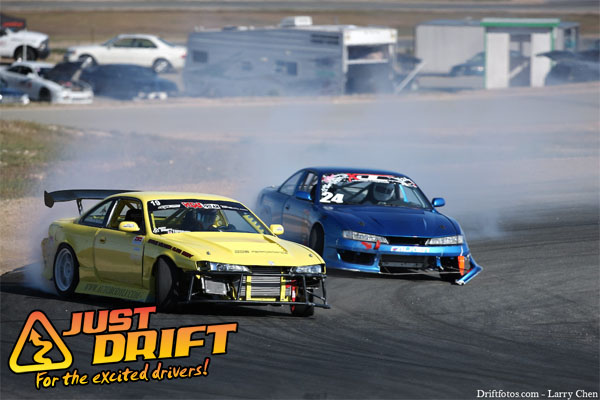 Mike Whitey almost made it to top 8! But the pressure probably got to him and didn’t get a home run. But the effort is very much there. HPS driver and JustDrift staff, Steven Chan was eliminated in the first round of top 16 by Chris Licup, whose name is becoming a mainstay at JustDrift events. 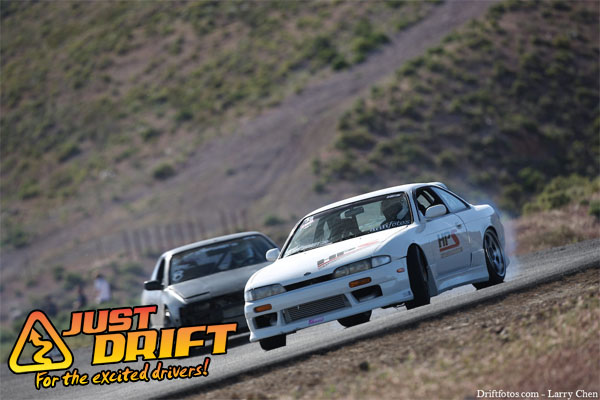 Battle was epic! Ryan Kado from Norcal was out in force with a back up car. Odi Bakchis and his crew was so ready to take this competition to the podium. They had a good camp site setup. Socal-Sliderz was represented well! God Speed is in the house! A lot of grass roots enthusiast in attendance. The drifting atmosphere has been so very positive and light, all we need is a better weather. We can do this year round! 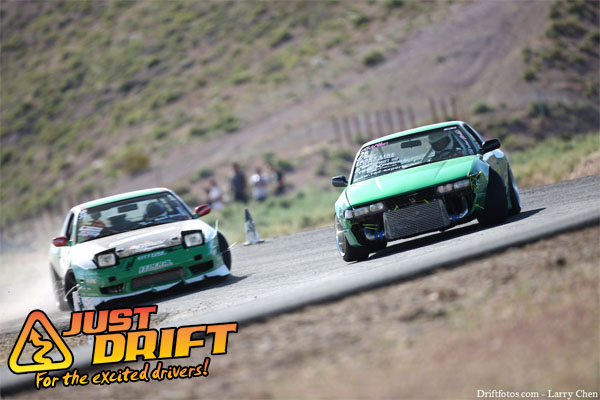 Mike Bolanos eliminated the first threat Ramon Hernandez. The person we expected to finish high in the ladder, Tony Cisneros in the GTO missed the Top 16 by 2 spots.

and David Sissium in a super charge E36 BMW missed the Top 16 by a hair!  Odi Bakchis battled out the “King of the Hill” title from Mike in a good tight battle. But his efforts were not enough to bump out the 2009 Topdrift Champion from his throne. 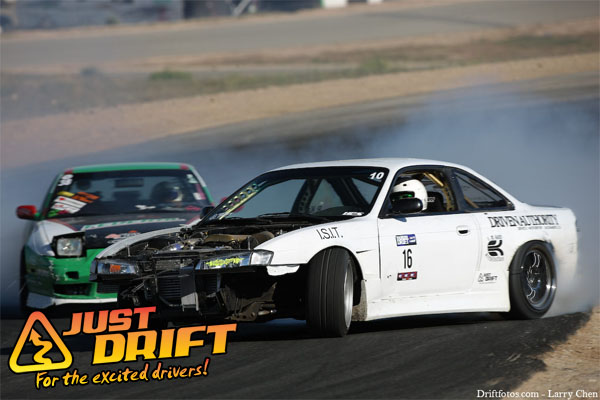 Ryan and Mike duking out the turns of HTM. Odi  put Josh Guild in 4th place and got himself the last spot in the podium. Congrats to the winners! 1st Mike “Bomac” Bolanos, 2nd Odi Bakchis, 3rd Ryan Kado. 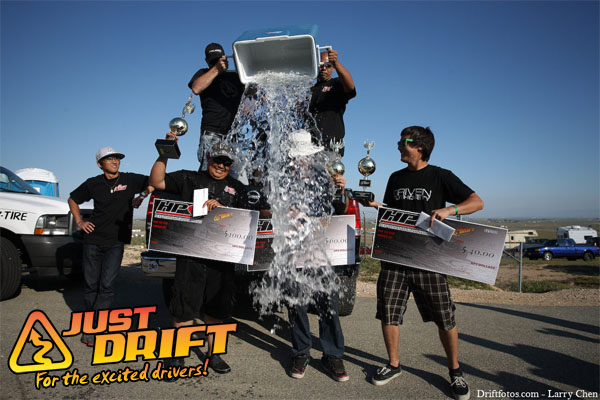 Here’s a short clip from round 2!

“Why We Slide” rough footage from paul zlatin on Vimeo.

Comments Off on TopDrift Rd2 – recap! 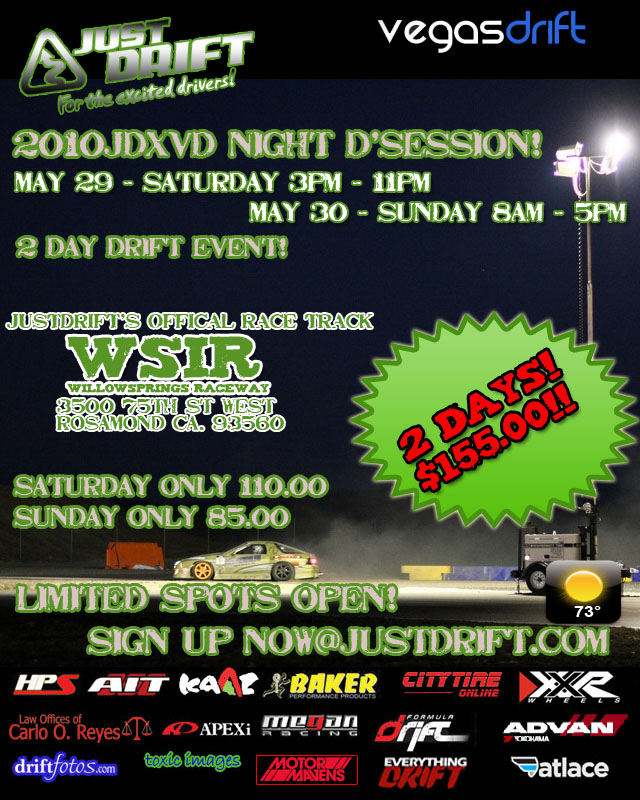 $105 Saturday only
$85  Sunday only
$155 both days!
UPDATE! This event is half way full and we still have 2 weeks to go! Grab your spots ASAP!
SATURDAY

Comments Off on JDxVD – Night and Day open drift session and drift clinic!